Sacred Heart College First XI commenced their 2020/21 Messenger Shield campaign back in Term 4, competing in a 9 team competition. Led by Captain, Luca Whitelum, and Vice Captain, Matt Barnes, the team had good success in term 4, losing only 1 game in the last over of the match to eventual grand finalists PAC. Notable victories came against Pembroke, with Matt Barnes making 100 runs, and Scotch College, with an impressive 111 runs from Will Patton. By the end of term 4, the side was sitting at the top of the ladder, which was very tight between the top 5 schools. Term 1 required us to maintain the good form, to ensure a finals berth.

The team continued this form, defeating second placed St. Peters comfortably at St. Peter’s securing a final spot. Incredibly, the First XI went undefeated in term 1, finishing in top position and securing two home finals. The Semi against St. Peters was a much tighter game than the previous encounter, however we held on to defend our total of 138. The final was due to be played against PAC, however the game was abandoned due to rain, which meant Sacred Heart retained the Messenger Shield due to a superior ladder position. This was the first shield won since 2004 for Sacred Heart College.

The following week our First XI played the Intercol fixture against Rostrevor in a two day game at Rostrevor. The boys managed 177 runs in 60 overs, but needed to defend this total for 100 overs to ensure the victory. We bowled extremely well and managed to bowl Rostrevor out for 127. This victory wrapped up what has been a very successful season for the First XI. Congratulations to the Captains Luca and Matt, players and the First XI Coach Graham Sedunary on their season. 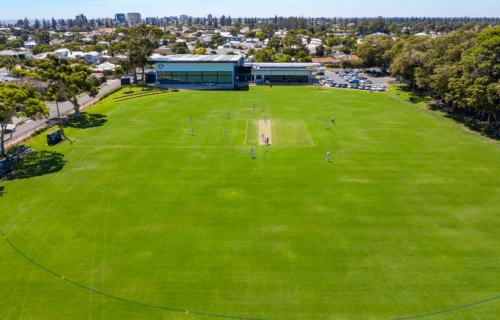 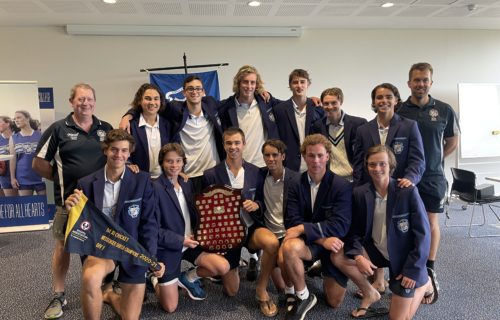 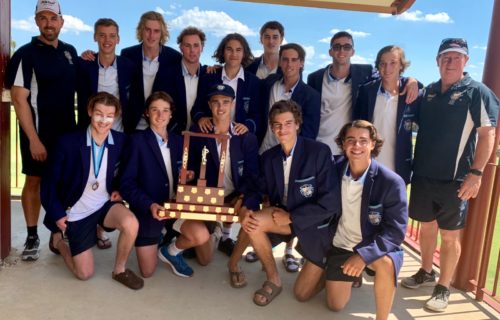 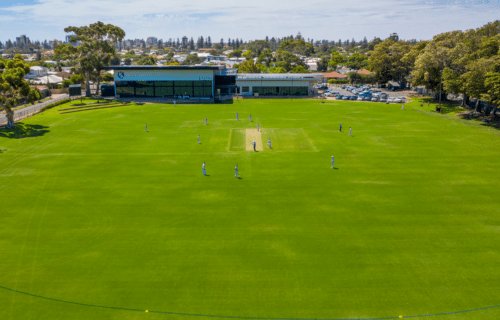 Year 7
The Year 7 Boys Knockout Cricket team played Burnside, Belair and Craigburn Primary Schools in a round robin tournament at Champagnat on Wednesday 17 March. The morning match against Burnside marked the first opportunity this group of Year 7s have had to represent the College in a knockout format, the nervous energy was obvious. After a shaky start the team settled nicely into the game and put a strong batting innings together. This proved too much for the opposition and the boys comfortably moved through to the final vs Belair Primary in the afternoon. On the back foot from the start, we lost the toss and were sent in to bowl. Roy Rana’s pace bowling proved too much for the opposition top order batsmen and as a result left us with a short run chase. Hearts finished the day victors of the first round and through to the finals series in Term 4.

Year 8/9
The Year 8/9 knockout side had another successful campaign, with the depth and quality of our side on show for all to see. The team made its way to the point end of the tournament, after some very strong performances. We played Adelaide High, a notoriously difficult team to play and beat, the winner of this was to play Heathfield. This match was like a grand final for us and the boys were adequately prepared and came to play, the energy and enthusiasm was radiating. The next 75 minutes of play was some of the best I have seen from an SHC side, the boys managing to bowl Adelaide High out for 70, due to some real intensity through the bowling and fielding. These totals can be tricky to chase, particularly with a strong bowling line up coming at you and the boys had to really grind away. Unfortunately we ended up losing on the last ball of the match, with a run out seeing the end of our campaign. A terrific effort from the boys and one that I am very proud of.

Sacred Heart entered a team in the School Sport SA Knockout Baseball Competition held at Seaton High. The boys were soundly beaten by Seaton in their opening game 14-0, however the match of the day was to determine second position against St Michael’s College. The boys were 5-4 up going into the last innings, however an errant throw allowed 2 runners in, giving the match to St Michael’s. With the Hearts team made up of mostly year 10 and 11 students the boys are determined to have another go in 2022. Strong performances by Jack Hutton and Connor Gluyas on the pitching mound and also by Archie Lovelock and Sam King in the outfield. The team was well coached by Adam Wurfel and managed by Warren Wright. 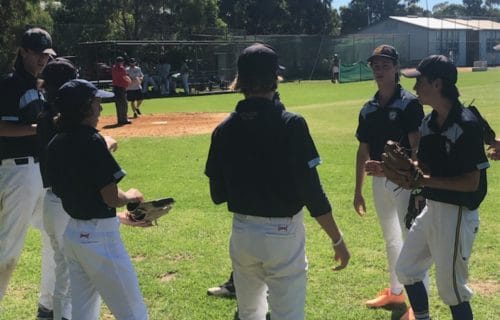 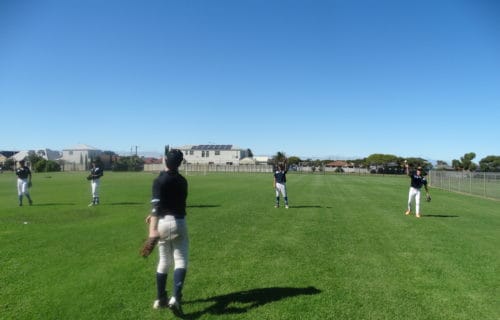 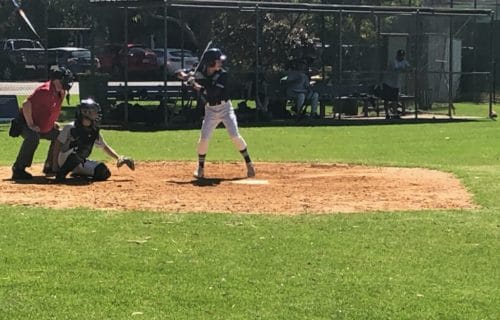 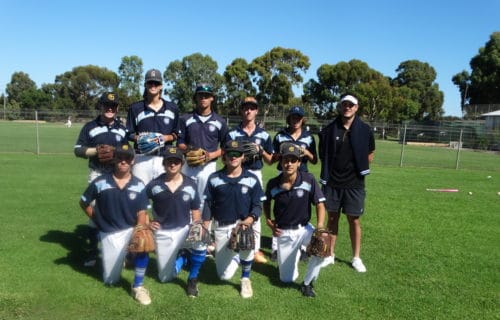 The SACSSGSA Athletics Carnival was held on Tuesday the 16th of March at SA Athletics Stadium. Our Sacred Heart Girls performed consistently throughout all age groups on the day in both track and field events.

Finishes in the top 3 placings in each age group resulted in us winning the Overall Aggregate A-Grade Championship Trophy. Well done to all the girls who represented the College with pride. To top off the day we had three students represent the College in the Championship 100M race which comprised the eight fastest athletes from the day.

Congratulations to the girls listed below who set new records for the carnival. 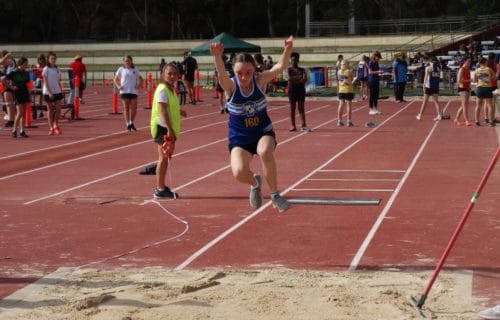 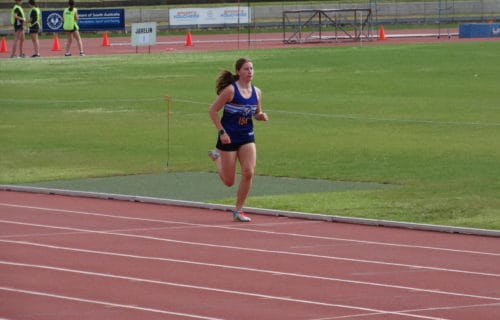 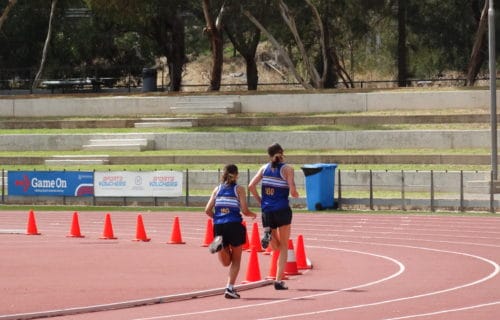 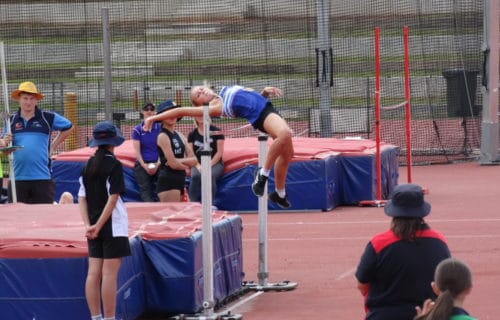 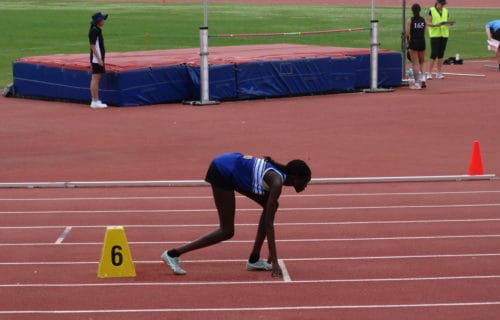 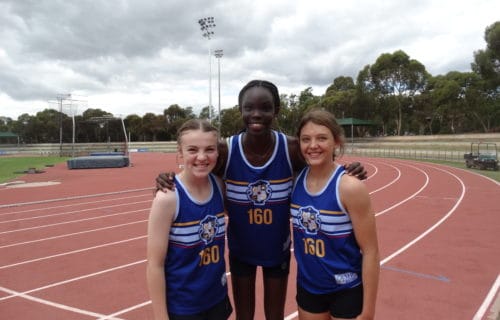 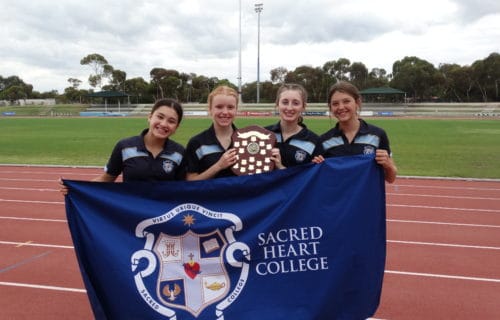 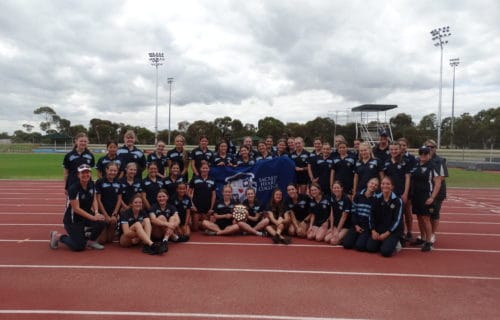 On what was a warm and sunny day our students put in tremendous effort on both the track and field. The team achieved an overall finish of 4th in the A-Grade Competition.

Congratulations goes out to all athletes who competed on the day with a special mention to the athletes below who set new records. 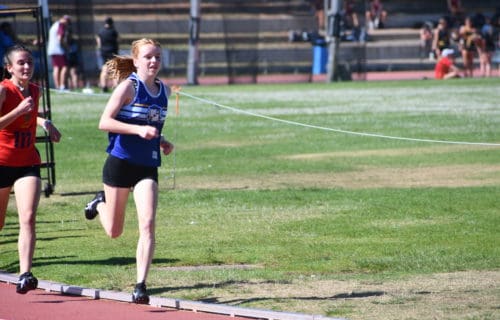 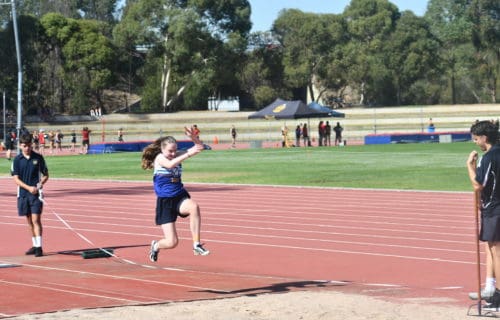 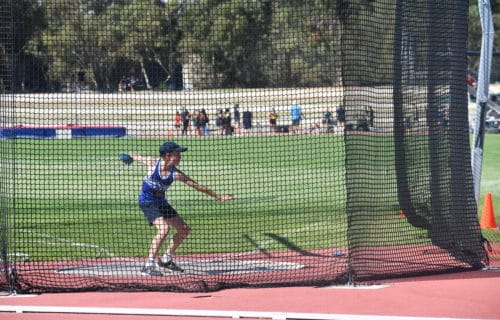 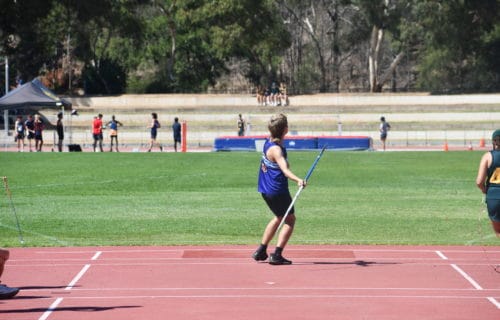 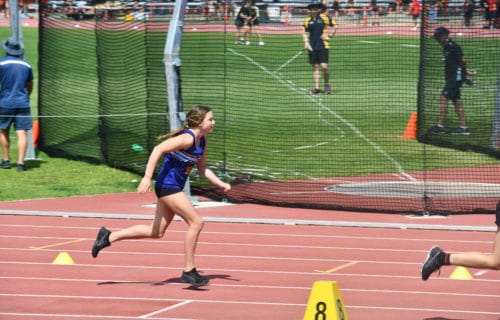 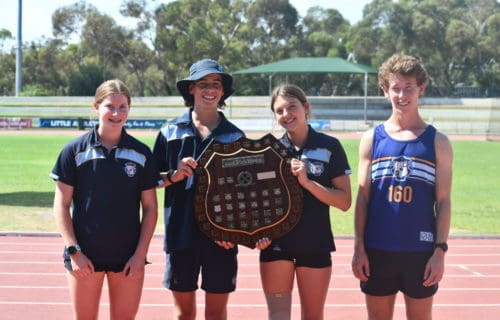 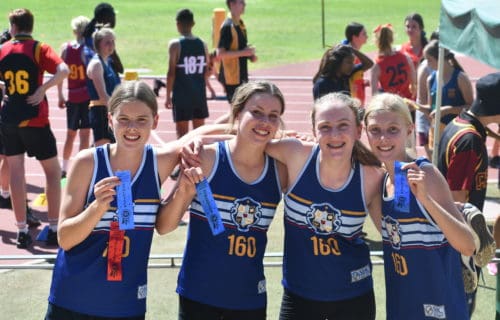 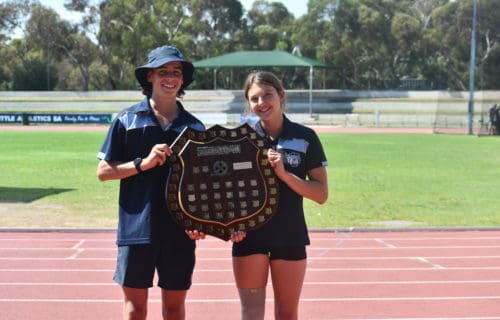 Congratulations to the Sacred Heart College swim team on their very commendable performance in finishing 3rd at the Grand Final of the Sports Association for Adelaide Schools swimming carnival, at St. Peter’s College on Wednesday, 24th March. Sacred Heart were the first placed Co-Ed school at the event. The depth of the squad and their supportive manner was pivotal in their fine overall performance.

The placement of swimmers into their designated events was handled brilliantly by the “on deck” coaches, Ruben Gear and Fletcher Luscombe. Thanks also to our team managers Kate Stewart and Warren Wright.

A highlight of the event was the breaking of a competition record in the under 16 medley relay. Well done to Matthew Clifford, Ryan Clifford, Clancy Luscombe and Kallen Kernot on this achievement. Once again, well done to all involved.

Good luck goes out to all our summer sports teams who are competing in playoffs or wrapping up their seasons this weekend. It has been great to see such strong numbers of students participating in the Blue and Blue in 2021 and we hope it continues into the winter season.